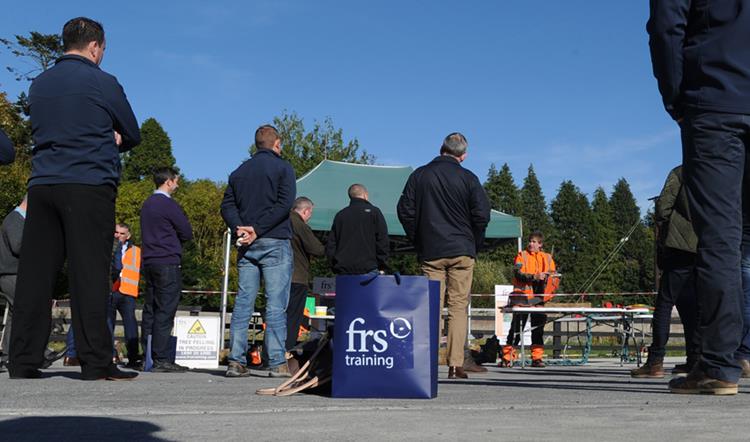 The destructive storms of late and the role of the National Emergency Committee, along with the fact that chainsaws do not discriminate, were brought to the fore at the FRS Training ‘prepare through training for the new harsh weather challenges’ event held at the FRS National Offices and Training Centre in Roscrea, Co. Tipperary recently.

Key members from the County Councils, OPW, Emergency Services, Construction, Stud, Fishery and Forestry Industries were invited to this most relevant event to gain insight into what challenges our turbulent weather patterns have exposed. In addition, they got to see first-hand how the right training is vital to be prepared for the harsh aftermath that this collective group are faced with.

Guest speaker, Sean O’Neill, Director of Communications, Transport Network Ireland was welcomed by FRS Training General Manager, Colin Donnery.  Sean spoke about how people using chainsaws to clear debris after significant weather events across Transport Infrastructure Ireland’s (TII’s) national road network and Luas light rail network need to maintain their professional skills and training for their own safety. Sean also shared a personal story of how chainsaws no not discriminate against a left and right-handed person.  Sean said, “This is something that I didn’t find out for years and each time I was putting my body in danger as I was using the saw wrong, now I am trained in the correct use of the saw, which is the very same way regardless of being right or left handed.”

This message was reinforced by Eugene Doyle, Training Consultant, FRS Training, during his presentation which brought the group through the City & Guilds stepped training programme and wall garden system and also by Seamus Whelan, FRS Training Chainsaw Training Tutor, during his very engaging chainsaw demonstrations.

The topic of storms and the role of the National Emergency Committee were spoken about by guest speaker Dr PJ Claffey, Programme Manager, HSA. Lively debates where shared about the importance of clear public communications before, during and after storms which reached the consensus that we need to always air on the side of caution and prepare for the worst. This is to prevent the repeat of what happened during the ‘unnamed’ storm of 2014. When asked about the colour grading of storms and the confusion that this sometimes brings PJ said “this is an area that is being looked into and what other countries are doing also by the committee.”

The second part of the event was taken into the practical hands of Jim Dockery, Training Manager, FRS Training and his team – Seamus Whelan, John Donovan, Seamus Quigley and Tom Duffy who ran live demonstrations on Teleporters, ATV’s, Tractors, Chainsaws, Manual Handling and First Aid. The engaged audience asked many questions that were clearly addressed by the expert FRS Training Team.

Tomas O’Beirne Health and safety Manager, Coolmore Stud, Fethard, Co Tipperary, the world’s biggest and best thoroughbred racehorse breeding operation, attended the event and said “Thank you for a most informative and well organised event, I found the demonstrations to be well structured and a very effective way of delivering the training course material. The demonstrators were very well informed, generous with their knowledge and time. We need to be certain that our workforce are skilled & trained to the highest of standards and with the help of FRS Training we are getting real & tangible results.”

Great connections and reconnections were made over lunch and the bright, sunny day almost made the idea of storms fade away.  However the group are always on call to be at the cold face of the destruction left behind after a storm the realities are never far from their minds.

FRS would like to thank their guest speakers and guest on the day and are confident that it was a worthwhile event for all based on the positive feedback received.