Farmer refuses to use a quad bike again after terrifying accident 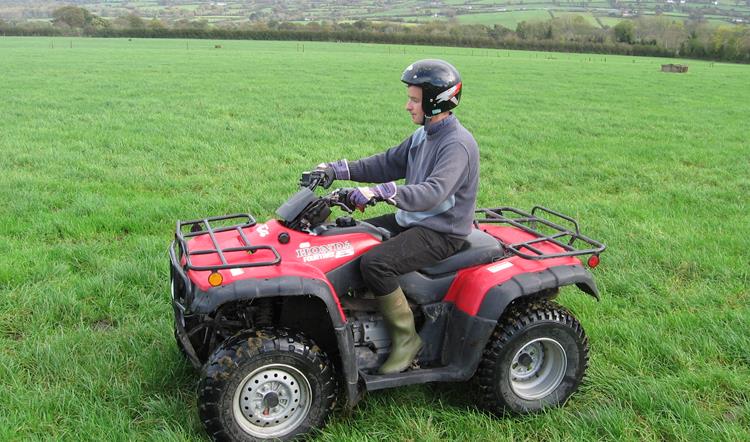 We wanted to share this story that featured on http://www.thatsfarming.com to highlight the hidden dangers that can have disastrous effects. We will be demonstrating Quad Bike safety at the Tullamore Show and Ploughing so make sure you give time to safety and come along. We will also go through the safety gear that you should always wear while operating Quads.

A farmer, who wishes to remain nameless, was driving his quad as normal through one of the paddocks on the dairy farm where he works on August 1st, when the quad hit some loose, hidden stones in the grass and caused the quad to flip over.

The 47-year-old man was on route to get one of the family’s cows for A.I servicing. The rocks had fallen off a nearby wall on the narrow corner, where he was set to travel. Upon impact, the quad flipped over 180 degrees and landed on the farmer, pinning him to the ground. The man managed to escape being trapped by the quad but concedes he was lucky to tell the tale.

The farmer suffered no major injuries, though suffered some big cuts and bruises, one to his head. He says he has now learned his lesson and is going purchasing some safety equipment to ensure he is protected should this happen again. The incident occurred near Lancashire in the UK, August 1st. The farmer says he is done with quad bikes and will use other modes of transportation in the future.

"I am done with quad bikes now, I will either walk or take the pick-up", said the farmer.

Peter said certain media outlets need to now step up their game and stop inadvertently promoting a lack of safety on quads. He noted a recent TV programme, where two presenters were pictured on the back of a quad, neither with helmets on.

“Quads are designed for one person to ride. They are not designed for passengers. Yet they show on TV a clip of two well-known personalities on a quad bike with no helmets on either of them”, Peter said.

“If we want to change the culture, it should start with the media showing a person on a quad with a helmet on. It should not show someone without a helmet”, he stated.

Peter then questioned why a public campaign on quad safety, like the ‘Reduce, reuse, recycle’ campaign, can't be put in place to help promote the safe operation of Quad bikes.

“We had 31 landfills ten years ago in 2008. Now in 2018, we are down to five landfills. The education has shown that it is working, like with the ‘reduce, reuse, recycle campaign’ so why can’t we do an education programme for kids on farm safety?”, Peter questioned.

“It would get the message out there and change the culture” he added.

The farm safety ambassador then offered an alternative present idea for those with a birthday coming up, Quad bike safety lessons.

“The FRS can come out and offer quad bike training for up to 6 people for €500”, said Peter.

“Coming up to Christmas, why don’t two families get together and each family buy three of their family members quad bike training”, he continued.

Peter then said that any new quad bike sold, should have roll bars mandatory fitted.

“I think any new quad bike that is being sold should have them (roll bars). But there should also be a grant there for it, as they are expensive at the moment...Training should be mandatory with any new bike sold”, he stated.

“About 50% of those killed on quads in the last ten years, were killed because they were trapped under it or the bike rolled over on top of them,” he concluded.

Visit Farm Safety live at the Tullamore Show this Sunday 12th of August. Official opening will take place at 11am by Mairead McGuinness, MEP.